The World is Angry 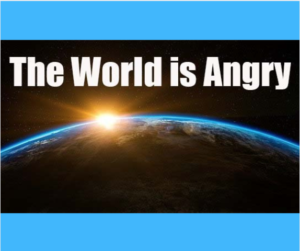 This is such a hard time right now for everyone.  There is so much uncertainty and loneliness.  People are taking out their frustrations and sadness on anyone they can.  Right now the world is angry!

I have been continuing to see so much negativity online.  I mean it is how we communicate these days especially during this time of a pandemic.  People are mad at other people.  They are mad at our president and other government officials.  They are mad at companies for various reasons.  It is like a cesspool of unhappiness and anger out there.

My husband had his taxes prepared by H&R Block and we got the lowest $500 advance and had his tax fees taken out of that instead of paying upfront.  This has meant a lot of uncertainly as to how he would get his stimulus check.  Seeing as how I was put on furlough recently and was unsure of how long my unemployment would take sprinkled in with the fact that I have an anxiety disorder and created a big mess of worry.  I stalked their website and their Facebook page trying to see them update new information on this.  People were so angry that they were not getting direct answers or people were getting different answers from different offices.  I mean it is frustrating but whoever they had handling their social media was telling them that they were still waiting for the IRS to get back with them on how these would be handled.  People were still angry and saying mean things to whoever posted those comments.  Then H&R Block stopped commenting and then they got really mad about that.  Nobody was “listening” to what they were saying and people were being mean so why would they continue commenting?  People are saying they will never use H&R Block again.  None of this is normal.  Nothing is normal about getting a stimulus check due to a virus so how in the world could they have ever known this would happen and that nobody would know how those with advances would need more money put out there to them through that same direct deposit information.  I don’t think we should be so angry at them or any other tax agency for this.  We all need our money and want our money but why are we being so rude and negative?

Texas Workforce Commission is overloaded with claims as is every other state.  People are angry about this and rightfully so in some cases.  I have dealt with this personally.  I think in some cases they are not doing all they can to help the citizens of Texas out but some of the anger is misdirected.  People are angry that there are not enough people answering phones and processing claims which is totally frustrating and angered me as well but they again had no way of predicting and preparing for this.  Now they hire in more people and then we all are complaining that we got through but the person did not know much about anything.  These people are not walking in the door knowing how unemployment works and how the system works.  You can’t just insert a computer program or chip in their head to make them get it all right up front.  I mean it seems like on some subjects we simply cannot be pleased.  I will say that I suggested they start posting about and making news stories about some of the common issues and what may be going on and how long certain things take that could help alleviate some of these calls.  Make the system where if someone has duplicate login user names attached to their social they can still access the system just to get their claims filed and save phone calls and time.  Make resetting a PIN number easier for people than having to call and get a live person because some people have not accessed their accounts in years and they no longer have the same email.  There are definitely things they can improve on.  I get it the anger is because of the financial uncertainty as bills come due and food runs out but some of the anger I have seen is just outrageous!

We want to be mad at people for still shopping.  We want to judge them because that single mom has her child with them when maybe they had no choice.  I am here to tell you that when I lived in Sherman, which is about 20 minutes from here, I had no family in that city.  I would have had to take my son with me to get necessities.  Do delivery or pickup they say.  Well that is not always easy either because they are out of things or maybe you run out of things and it is several days until you can get a pick up time but you need milk now.  People are angry because they saw someone with a television in their cart at Walmart.  Really?  I mean could it be that they went out shopping just to upgrade because they got that stimulus check and they really did not have to?  Of course that is always possible but what if they have a family and they are now all home and their television went out on them.  Why would they need to order a TV for delivery if they had to go to Walmart anyway?  That makes no sense.  Do not get me wrong I definitely know people are going into stores just to browse around but that can be a touchy subject also.  In some cases maybe they just mentally did not feel well and they needed to get out of the house.  As a mental health warrior and someone who worked at home prior to this and thus spent most of my time at home I can tell you that it is suggested for depression and for those working at home to get out of the house.  I know we can go for a walk and do other things but I am just saying that it is not so cut and dry.

We have busy body Karen who sees on social media that their friend or family member went to someone’s house or went to the park or whatever and we want to get angry at them and blast them for doing such a thing.  I mean come on?  Should we all stay home and not get out there like that?  Yes but seeing family or going somewhere for a bit can be good for you as long as you are still practicing social distancing and who are you to judge them?  I will not lie and say in certain instances I have not commented on things to myself often just for a laugh from the hubby but really we need to mind our own business or at least keep it to ourselves and not spew anger.

I could name so much more but I think we all know what I am talking about here.  It is everywhere online.  I see people just spewing the negativity daily.  We are all frustrated and angry.  We all feel so uncertain right now.  It is okay to feel this way and it is okay to get angry but don’t direct that anger at those who don’t deserve it like your loved ones or those not directly the ones at fault.  Nobody would have ever predicted this to have prepared for it.  This is a time we should all be more kind to each other.  Get angry but don’t misdirect it or put it out there without thinking and having a caring heart.    Turn up the music and sing loud.  Go for a walk.  Make yourself a drink.  Watch some meaningless television and think before you “speak”.  Hopefully soon things well get back to normal and the world will no longer be such an angry place.