My Struggle With Mental Illness As A Youth

When did my depression and anxiety start is something I get asked quite often when someone finds out about my mental illness and gets close enough to me to want to ask.  I never know what to say because I never sought help until I was the age of 28 finding myself going through a separation and later divorce as a mom of a toddler although I know without a doubt it started much earlier than that. 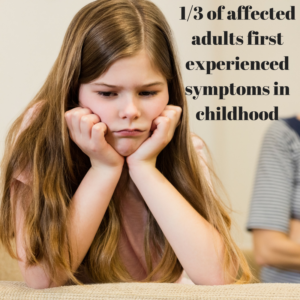 Just tonight as I listen to a playlist from the 80s while working on my craft business I am somehow struck with thoughts of dying and my fears around that.  I begin to think of how I would know how my son is and other family members.  What about my stepsons and future grandchildren?  How could I not be around and how could I even begin to think about it all.  I feel the anxiety surging up my chest.  I feel the tears starting to roll out of my eyes.  I then reflect on my childhood.  You see the thought and fear of death was something I remember being very anxious about as a child.  I can remember lying awake at night and thinking about not seeing my parents and grandparents.  How could the world just go on without me and how could I never get to see those people again?  I would cry myself to sleep many times thinking about it all.  I honestly don’t know if I ever talked to my parents about it.  I don’t remember it if I did but I do remember how I felt.

Now whether the above is enough to say that I had depression and/or anxiety I don’t know but it certainly would seem to be that I had possibly a heightened sense about these things in that I let it keep me from sleep and make me so upset.  I think I have always been what could be deemed as “sensitive” and whether that means I actually had signs of a mental illness back then I honestly don’t know.  I can tell you that as I entered my teen years I definitely suffered from mental illness.  Depression was present and even suicidal thoughts.

Junior high was a really tough time for me.  I had moved in the fourth grade to a new smaller school after my mom remarried and I had a pretty hard time trying to fit in there.  I never really felt like I belonged.  Junior high years brought a lot of issues with just the normal puberty issues along with already feeling like a complete misfit.  My parents had divorced when I was young and mom remarried.  I had an off and on again relationship with my dad.  Then my mom also had a new baby.  I love my brother.  I always have and I always will but my world completely changed when he came along.  I stopped being an only child and I took a back seat during a crucial time in my youth and it was not easy.  I was so depressed and I do not even think my parents realized it.  If I wasn’t such a “chicken” and didn’t have so much anxiety and worry over some of the methods of killing oneself I probably would not be here today writing this. 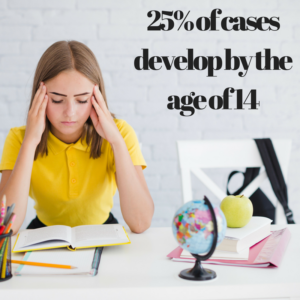 I was a stupid and scared depressed teen.  I thought of things like drinking harmful poison liquids to kill myself.  What could I drink that would not taste bad but would kill me?  Well I was picky so that probably would never have worked.  What medicines could I take a lot of to make the pain go away?  Making the pain go away meant I would never return.  I would never see my little brother again or any of my family.  I honestly thought a lot about my brother and I loved him and he is also a big part of why I am still here.  He took attention from me in some major ways but I was smart enough to know it was not his fault and he was important to me and I hated to think of leaving him alone in this world with no sibling.

A while after entering high school I gained some unexpected attention and popularity and it changed my life in some big ways.  I had confidence and felt like I was actually likable and maybe this whole teenager thing was turning around.  I got a boyfriend later my Freshman year and I had an overall decent high school experience as far as most were concerned.  Deep inside I still struggled.  I was constantly worried about my image.  I feared I wasn’t pretty enough or skinny enough.  I went through a lot of days of barely eating much trying to be skinnier and prettier.  My parents were always busy with my little brother and missed a lot of my activities.  I still always felt second best.  I guess maybe that is why popularity at school was so important to me.  I wanted so badly to be liked and so badly to be popular that I made some serious mistakes and searched for love and acceptance in all the wrong ways.  I learned a lot from it although not until much later in life.

One thing that I am not even sure started high school or junior high was my major anxiety over speaking in front of people.  I would count the paragraphs if we were taking turns reading and obsess over it.  I would count it again and again after each person read.  I just knew that I was going to say something stupid or get made fun of for some reason.  Forget giving speeches and reading a report in front of the class.  I remember physically visibly shaking one time.  I was physically ill.  I can also tell you that I missed a lot of school during those days and it was mostly my mental illnesses causing me to be physically ill and I would get especially sick to my stomach.  I don’t know if my parents still did not notice it or thought it was not bad enough for me to seek help but help back them could have probably helped me then and even now.

I have battled these mental issues much of my life as you can tell and my life has been filled with a lot of bad choices and heartache that possibly could have been different had I been able to get some sort of help for my mental illness back then.  I am not faulting anyone because things were a lot different back then.  What I want to come out of this is for someone, anyone to read this and realize how important mental illness is and that it affects our youth and is something they will not just get over.  They will carry it with them into adulthood.  Who knows what a difference getting some kind of help could make to so many?  How many suicides could be prevented if we all felt more open to getting the help we need?  How many bad childhood and adult choices could be prevented if we learned early on to deal with our issues and try to love ourselves a little more by getting care we need?

Early detection and getting rid of the stigma surrounding mental illness is so crucial.  Way too many go without seeking the help they need because they fear the judgement from others.  As a child or teen some even fear judgement from their own parents and family.  Why is it that we so openly seek medical treatment for every little thing physical wrong with us but are reluctant and often even embarrassed to seek treatment for mental illness, the very illnesses that deal with our brains?  Aren’t our brains, our minds, just as important if not more important than the rest of our body?